Bemo Rail will rebuild a 100 meter lorry track, in a bunker together with the museum’s volunteer corps for the Atlantic Wall Museum in Noordwijk, the Netherlands.

“The Atlantikwall Museum Noordwijk consists of a series of bunkers from the Second World War. At 250 meters from the Bosweg, on the Verlengde Bosweg 1, lies on the cycle path in the Noordwijk battery, consisting of a fire control bunker, artillery bunkers, ammunition bunkers and residential bunkers connected by a tunnel system. Volunteers have worked hard in recent years to make it possible to open up different bunkers and the corridors to the public.” Bemo Rail is proud to contribute to this unique historic project.

“Before the 2nd World War started, the dunes north of Noordwijk were used as a golf course. This changed at the end of 1940, as the German marines took control of the area. About 180 soldiers came to reside there and living quarters, washing facilities and combat places were built for them. In total about 80 buildings, varying from wooden sanitary facilities to heavy concrete bunkers which had walls up to 3 meters thick. The building of the largest bunker S414 took more than 1,800 m3 of concrete, the equivalent of the contents of about 300 modern cement trucks! Therefore it is no wonder the Germans also built a railway to the bunkers to transport all the required raw materials. This, together with rationing, schemes for changing the guard, and defence strategies required elaborate logistical planning.”

Bemo nominated: Vote for us! 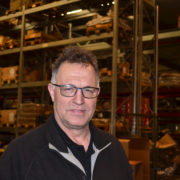