It is Wednesday, 1 July 1970 – a cool, summer day, with light rainfall, and only 13.3 degrees Celsius on the thermometer. Today, President Nixon urges the North Vietnamese government to negotiate peace before more blood is shed in Indo-China. Mr. W. Aantjes from the Dutch Chamber of Representatives proposes to postpone the national construction industry holiday until the winter so that more work can be done during summer, and Paul McCartney announces the breakup of The Beatles. (source history Dutch newspaper: Leidsch Dagblad 1 July 1970)

It seems to be a normal Wednesday, perhaps like every other Wednesday at that time, but it is a special day for Bemo Rail! On 1 July 1970, Bemo Rail was officially established by its founders Berkhout and Ter Mors.

Berkhout: “Before July 1970, Ter Mors and I worked together at Spoorijzer, a Dutch company located in Delft. I started working there immediately after obtaining my degree at the HTS (Higher Technical School). Together with Ter Mors, I was involved in the development of a railroad-bound locomotive, called a ‘towing mobile’. It was the start of a long and pleasant partnership,” says Berkhout with a smile.

“By the end of 1969, as a result of post-war developments in transport, Spoorijzer was suffering. This was the moment for us to follow our own path and the start of Bemo Rail. We started out as a small trading company, selling rails, rail chairs and locomotives from the home of Mr. Ter Mors, on the Bilderdijkstraat in Alkmaar. Mr. Ter Mors was responsible for the finances and represented the locomotives. I was responsible for the technical designs and the sale of our rail products, including crane tracks.

Bemo Rail at the fair

Berkhout: “We bought the locs in England, France and Germany and sold them in the Netherlands and Belgium. The first few years, our trade region was mainly in and around the Netherlands. Bemo Rail grew rapidly and so did our international clientele. Between 1978 and 1985, I visited Saudi Arabia a number of times to sell rails and rail chairs. Together with Archirodon, a Greek contractor, we installed crane tracks in Jeddah, Gysan and Damman. We even sold rails and rail chairs to the militarily organised North Korean construction company Dong Ah. Due to the growing trade, we were able to hire more staff and move into an office building on Phoenixstraat in Alkmaar. The first employees of Bemo Rail were Mrs. Ypelaan (accounting), Piet Nijhuis (commerce), Hans Overing (technical drawings), Jolande Vergaaij (telephone operator and typist) and Teun Druijf (technical employee).

Mr Berkhout and Teun Druijf in the office

“I look back with pride on the past 50 years. The highlights for me were the international projects and the moment we started producing our own rail and shunting products. The broadcast of ‘Brandpunt in de Markt’, a Dutch television programme in 1985, was also special: we drove into the studio – on rails – with our first self-built Bemo locomotive. It was a quite a challenge, because the total weight of the locomotive was more than 45 tons! Also, Dutch Queen Beatrix was a guest at the Hannover Fair in 1990, which was very memorable for me. I officially retired in 2006, but I still enjoy being regularly involved in the daily activities of Bemo Rail.”

The first orders of Bemo Rail

Rail Chairs
In 1970, we received an order for rail chairs from concrete factory De Liesbosch in Houten, this was one of our very first orders. Grain handling company Bunge, located in the Benelux harbour Rotterdam Europoort, also ordered rail chairs that year: 558 of them for the sum of 37,888 guilders (approximately 17,192 euros). Nowadays, instead of rail chairs, we use rail clips placed on discontinuous sole plates to fix the rails. 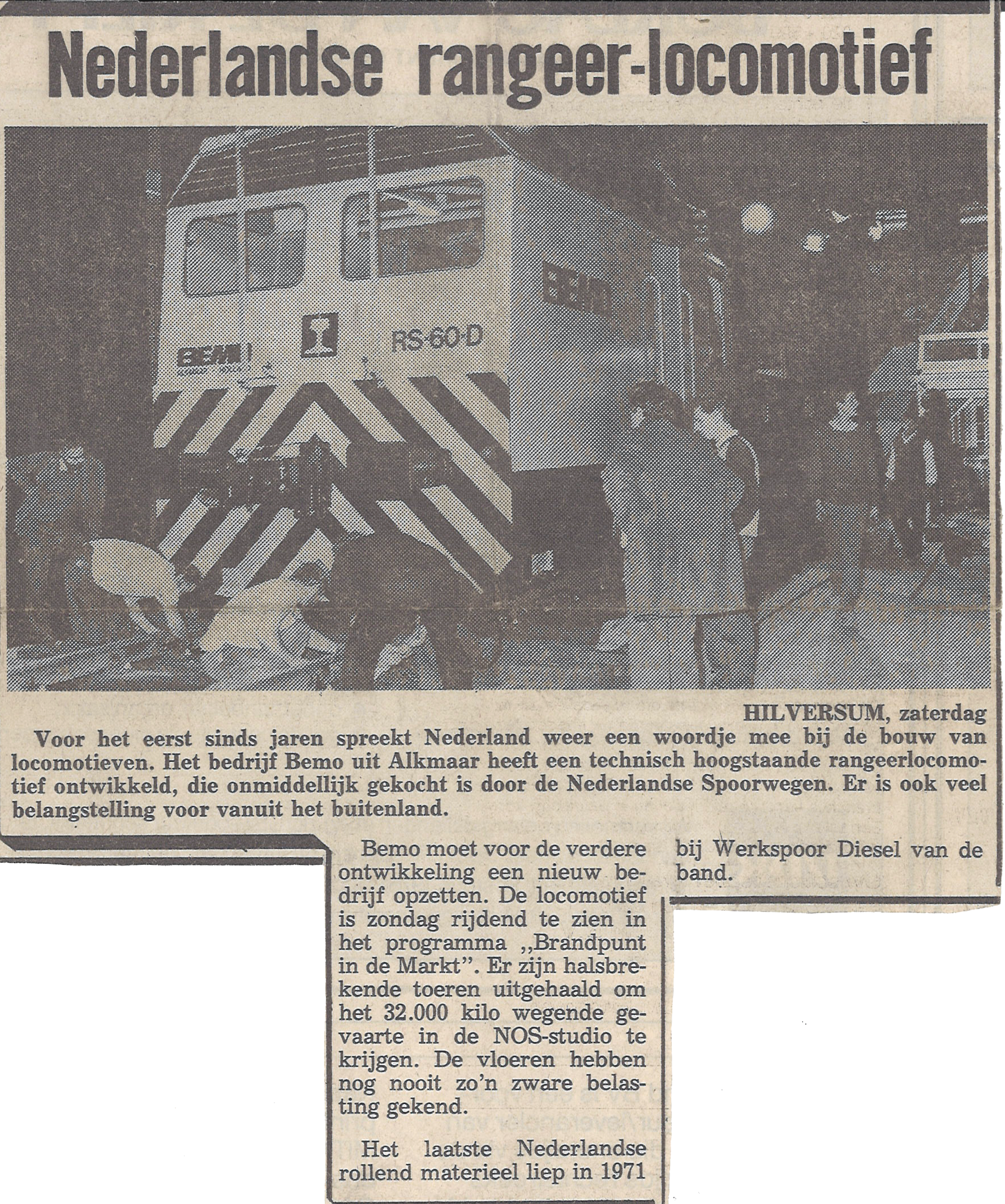 Ready for shipment to Taiwan

Tata Blusloco 102/103; have been delivered and taken into use

Bemo nominated: Vote for us!